The full-time educators of Trackers Portland includes experienced skills instructors on the leading edge of place-based education. We are a family of professionals whose goal is superlative competence in our field.  Click on any bio photo to learn more. 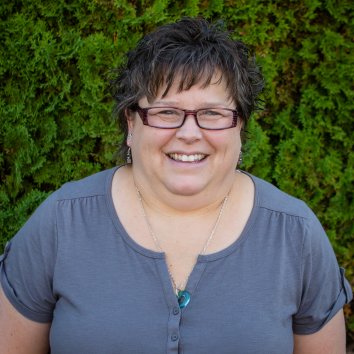 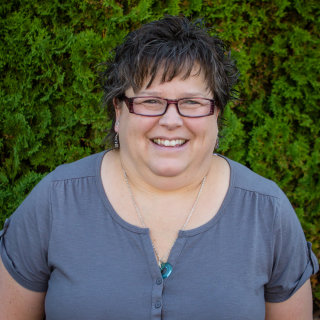 Chris joined Trackers full time as our Administrative Director in 2012 after 17 years in the credit union world. She has been involved with Trackers off and on from the beginning and is thrilled to be part of the community full time.

When she isn't processing registrations or assisting parents and staff, she enjoys camping, baking, cooking and hanging out with friends and family. She is actively involved in her daughter’s school and a strong supporter of her husband’s ultra marathon running. 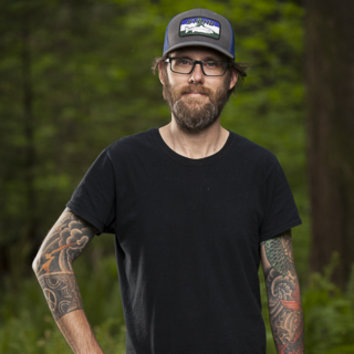 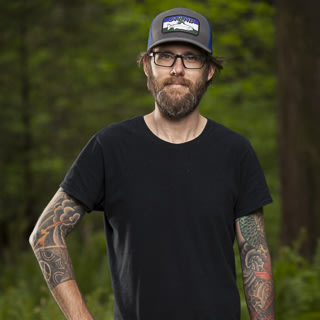 Tom, otherwise known as “T3”, has been a practitioner and teacher of primitive living skills, wilderness survival, tracking, and nature observation since an early age. Growing up in New jersey at the Tracker School he was raised with a deep reverence and respect for wild places and the skills our ancestors used to live close to the land. After graduating high school he spent a few years wandering the country, practicing the skills he learned as a child in both urban and wilderness environments. He eventually returned to Tracker school and after a few years became head instructor and director of operations. In 2009 he left Tracker school to start the Primitive Arts Collective, an outdoor education program that sought to teach people in small groups in many different states across the country. In 2014 Tom moved to Virginia where he helped to found Earth Village Education, a non-profit organization based on a 100 acre farm near Shenandoah National Park.

Tom’s role at Tracker’s Earth involves being both the land steward and an adult educator. His unique insight and first-hand knowledge about how large groups of people interact with the landscape help him and the Tracker’s team ensure healthy land management practices that will not only benefit the students, but also the wild things that are the centerpiece of these rural locations. Tom loves all things wild and free. During his down time you can find him on a river somewhere fly-fishing for steelhead with his spey rod and learning all the wonderful things the PNW has to offer.

Chris VanPelt is a riddle, wrapped in a mystery, inside an enigma. They are from the south, and have the best taste in barbeque, biscuits, and bourbon flavored candy. They enjoy nature sounds while sitting in nature.

Chris’ mission is to provide everyone with tools for choice. Life is full of choices and they want choices to be made from a base of knowledge. When we stop pursuing knowledge is when we have given up. They have spoken. 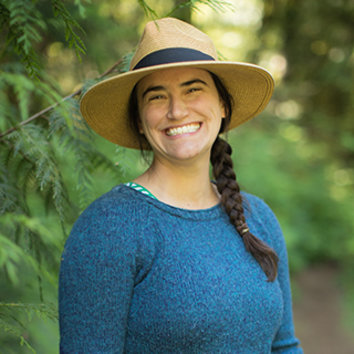 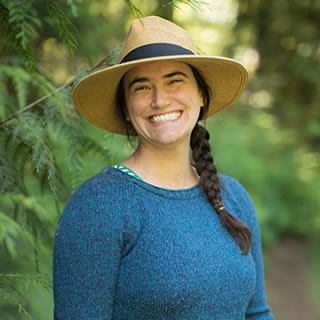 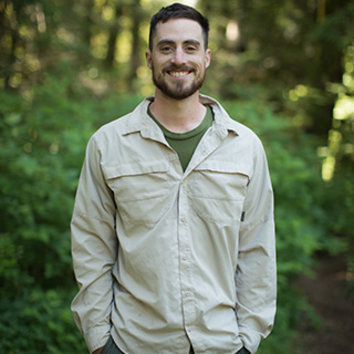 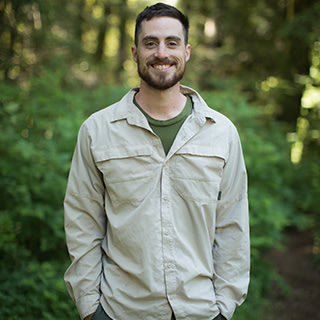 Born in New York and raised in the desert southwest of Arizona, Ryan has been obsessed with science and biology since early childhood. Prowling the wildlife mountain preserves and parks of his hometown were just the beginning of a lifelong dedication to learning everything he can about the natural world. His passions include woodworking and crafting, plants, birding, shelter building, primitive fire building, outdoor cooking, and teaching. His journey into Outdoor Education began several years ago volunteering as a Naturalist at Oxbow Regional Park, which fueled the inspiration to pursue a job at Trackers. Ryan believes that passing on knowledge, nature connection, and community are of the utmost importance for the next generation of young adventurers. When not working at Trackers, Ryan can be found hiking or gardening with his partner Licia and pet doggo Hazel. 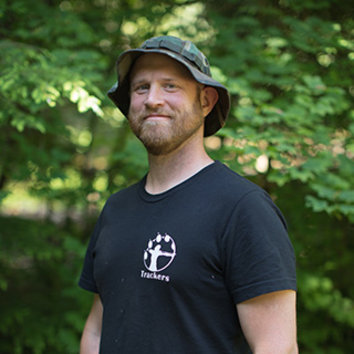 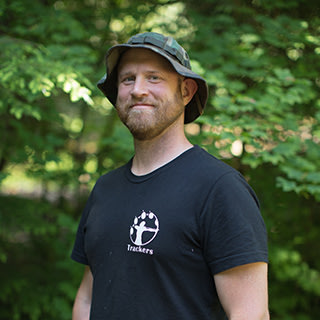 A lifelong outdoors enthusiast, Sam has held positions as a cowboy, wilderness guide, and back country chef before working with trackers as an educator. He has found that children are slightly more difficult to herd than livestock, but don't kick nearly as hard. 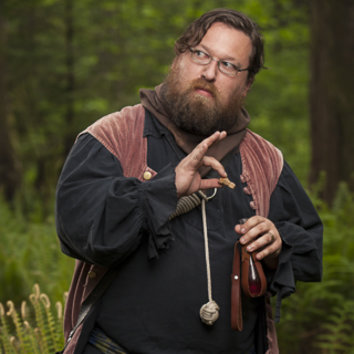 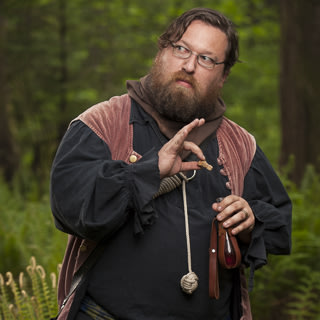 Greg Barrett is an enigma, wrapped within a conundrum, sealed with a kiss, encapsulated within a very loud theatrical man. He's been working with Trackers for the past 6 years in a variety of artisanal rolls: The School of Magic, Forest Ninjas, Secret Agents, Rustic Harvest, and for the past three years, Realms of Cascadia. His goal is to rekindle a love of wild places and foster self-sufficiency in today's youth. 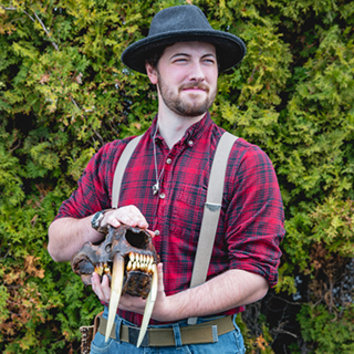 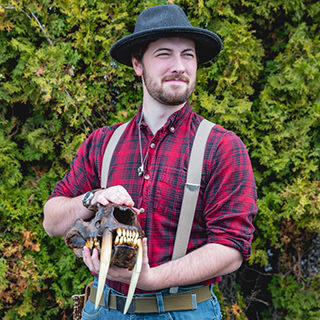 Nico comes from the Wild West of Arizona where he learned to love all things nature, especially the dead and super dead things. With the Indiana Jones persona he puts on for his classes, students are sure to feel the adventure while they learn about the land we share with the animals they will track. He loves to show kids bones and fossils and his favorite outdoor activities include but are not limited to: Tracking, Archery, Fire Building, and Adventuring.

Jody Fouse has been working at trackers for 3 years. Since a young child he has been immersed in bushcraft camping and hunting because of his awesome father who was one of the best bushcrafters he'd ever met. After spending a few years honing his skills and living on the Appalachian trail he went to college to study commercial arts. After 15 years of being a successful artist, he realized something was missing, the woods. At this point he moved to Portland and began his career at Trackers.

Born in North Dakota, Krist spent his elementary years exploring nature spaces in the surrounding farmlands. In Middle School, his family moved to the Aleutian Islands in Alaska. There he developed a love for hiking up mountains and waterfalls. After graduating from St. John's College in Minnesota, Krist moved to Oregon. He started working at a residential Summer Camp, Outdoor School, and with inclusion services. Krist worked at the Oregon Zoo for 20 years in their education department. Krist came on board with Trackers Earth as Summer 2020 Camp Co-Director. When not working, he shares his passion for nature with his two children pictured above (Krist is the head in the middle). They enjoy hiking and finding waterfalls in the woods and mountains. Krist's kids also love going to Tracker's camps and would like to work at Trackers someday.